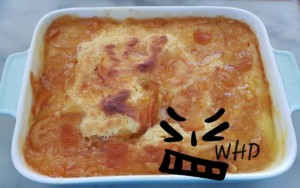 Preheat the oven to 180°C. Cream the butter, caster sugar and orange zest until pale and fluffy. Add the egg yolks, flour and milk to the butter-and-sugar mixture, mixing to combine. Don’t be alarmed if the mixture appears lumpy or curdled.
In another bowl, whisk the egg whites until soft peaks form. Add a spoonful of the whites to the flour mixture and gently combine. Gradually fold in the remaining egg whites, trying to keep as much air as possible. Spoon into a greased 22 cm ovenproof dish.
Pour the orange juice over the pudding and bake for 20–25 minutes, or until lightly golden and set.
During the last 5 minutes of baking time, mix the marmalade with 1⁄4 cup boiling water, spoon over the pudding and place under the grill until sticky.
Serve warm with chocolate ice cream.
Photo: Wayne Dugmore