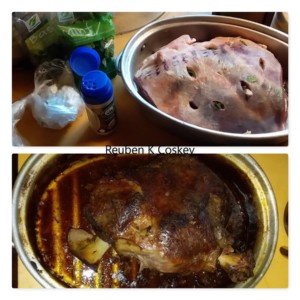 Use a sharp knife to make finger thick incisions in the meat to about the 2nd knuckle.
Stuff with some bacon pieces.
Bruise the mint leaves and stuff in behind bacon.
Remove outer skin of garlic and bruise to release that beautiful aroma of fresh crushed garlic. Cut into 4 and stuff a piece in behind the bruised mint.
Bruise the basil leaves, fill in behind the garlic.
Now push the rest of the bacon in behind that. 😊
Lightly coat/smear olive oil onto the meat and add a few shakes of salt and black pepper.
Pre -heat oven at 180°C.

I used my “BRAAIPAN”
Add 2 table spoons olive oil to the finely chopped onions. Place leg in pan.
Now add a shake or two garlic salt. About 7 shakes of Worcester sauce spice, and rub it into the leg.
Put the pan in the oven for 10 minutes without the lid. In the meantime boil a kettle.
Remove the pan from the oven. Add 500 ml hot water to the leg and cover with the lid. Turn heat down to 80°C and put the pan back in the oven.
Ten hours later remove from oven and do a test cut and taste. You may have to add more spices according to your taste.
Turn grill on and add the pan without the lid for around 10 minutes, constantly watching as the leg turns an almost crispy brown skin, adding melted butter with a brush to give that shine.
Recipe posted by Reuben K Coskey
Photo: Reuben K Coskey