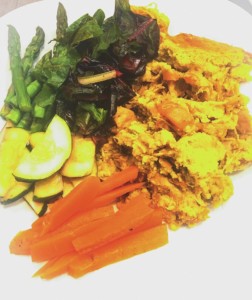 I doubled the recipe to cover top of pie.
In this recipe, I also added ½ tsp of cilantro per crust, and 1 cup of blended gooseberries to total amount of crust to add a sharp note, and texture. Coconut flour dough crumbles before your eyes if you don’t bind it. The finely chopped tartish tasting berries go beautifully with the savory, African theme. Gives it a zing.
(Whole pie crust: 132.5 calories. Serves 10 people.
Preheat oven to 400 degrees F.
Whisk the eggs, oil in a food processor or stand mixer.
In another bowl whisk the remaining ingredients together until combined.
Pour the dry and wet mixture into a food processor.
Add the cubed butter.
Process by pulsing until it looks like crumbles.
Spray a pie plate with cooking spray and pour crumbles into pie plate.
Press with hands to form dough right in the pie plate. Alternately you can also roll out dough between two pieces of parchment paper and flip over into a 9 inch pie plate.
Using a fork randomly make holes into the bottom of the crust.
Bake the crust 10 minutes or until golden.

Cover the crust edges with aluminum foil if using this for a savory or sweet pie that needs to be baked again, otherwise it will burn.