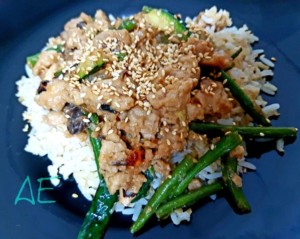 Marinate chicken mince in soy sauce and vodka in fridge for at least half an hour. Dust the mince with maizena. Heat some oil in a wok over high heat. Stir-fry the chicken mince, breaking up any lumps, for 2-3 minutes or until browned lightly. Set aside.
Fry the onion, capsicum, beans and mushroom stir-fry for 3 minutes or until just tender.
Add the garlic, ginger and chilli and stir-fry for 1 minute. Add the mince and the combined peanut butter, oyster sauce and coconut cream. Stir-fry until the cloudy color disappear (until the peanut butter split) and the stir fry is heated through
Serve stir fry over brown rice, sprinkled with sesame seeds.
Recipe and photo: Elize de Kock