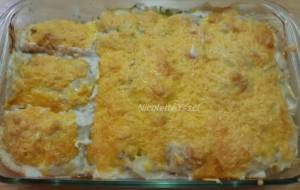 POTATO AND TUNA-A-LA-KING BAKE
Yesterday I had no idea what to make for supper….stood in front of the cupboard and took things out and then came up with the following (my own recipe) – Unfortunately by the time I remembered to take a photo it was all gone, will definitely make again and share a photo.
4 potatoes peeled and sliced
2 tins tuna
1 packet Royco Chicken-a-la king sauce
1/2 packet Mushroom soup powder
1 small packet chunky frozen vegetables
600 ml milk
Cheese
Salt and pepper

Boil potatoes until soft
While potatoes are boiling place milk, chicken-a-la-king sauce and mushroom soup powder in bowl and microwave (stirring occassionaly) until thickens.
Add tuna,  salt and pepper to the sauce and mix through
Once potatoes are soft:
In an ovenproof dish layer potatoes, then half the tuna mixture then the packet of vegetables,  then another layer of potatoes and then tuna.
Sprinkle grate cheese over the top and bake until cheese is lightly brown.
I served it on basmati rice.
Recipe:  Zelda Ellis
Photo:  Nicolette Yssel

2 thoughts on “POTATO AND TUNA-A-LA-KING BAKE”