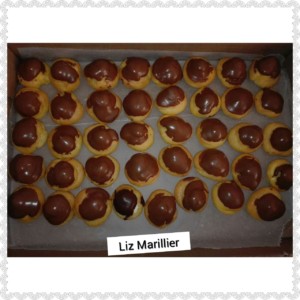 Bring water and margarine to the boil. Add all the flour in at once. Mix with a woodenspoon untill all the flour has been incorporated and a ball has formed. Take off heat and cool down for 20 minutes, stirring occasionally.
Add eggs one at a time, mixing after every egg. Put in a pipping bag and pipe round or long eclairs. With a bit of water on your finger push the little horns of the eclairs in. Bake at 180°C for 25 minutes. Once they come out the oven, poke a hole in the top to allow steam to escape. Once cooled, dip in chocolate and once dried, make a small hole or cut open and fill with cream. I bake them weekly.
Recipe and photo: Liz Marillier

One thought on “LIZ’S CHOCOLATE ECLAIRS”