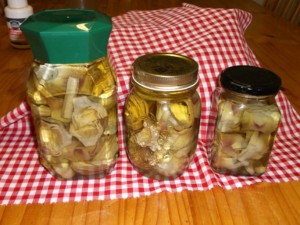 I prepared the artichokes by cutting 2/3rds of the top off and placing them in a large dish with 2 liters of water and a cup of vinegar to prevent them going black. I then removed most of the hard outer leaves and cut the bulb in half down the center.
I then removed the small “choke” placing the bulb back in the vinegar water. I boiled the bulbs until just tender in salted water with 2 Tbls vinegar. Removed, drained and allowed to cool. I then removed more of the outer leaves until just the tender base with a few very soft leaves were left. Packed them into sterilized jars and filled with garlic infused oil. Once they were cool, I packed them into the jars and topped up with the garlic infused oil. This is my first attempt, so I hope they turn out ok.

*Garlic Infused Oil:
Canola oil that I had placed crushed garlic in for a week or so and then I mixed this with olive oil, 50/50. I used half olive and half canola oil.
Photo and recipe: Terry Smith