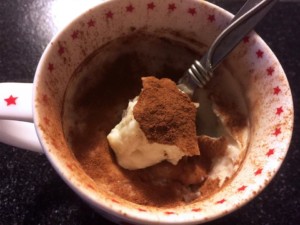 In a microwave jug add the 1 cup of milk.
Place in the microwave for 3-4 minutes until the milk is steaming hot.
In a separate small bowl add the 1/2 cup cold milk, with the 20 ml maize cornflour and 20 ml castor sugar.
Mix well so that there are no lumps.
Add the cold milk to the warm milk mixture while whisking.
Place in the microwave for 2-3 minutes and whisk in between every 30 sec at a time.
Remove from the microwave and add the 20 ml flour while whisking vigorously so that there are no lumps.
Add the last 20 ml maize cornflour and also whisk vigorously so that there are no lumps.
Place back into the microwave and microwave for 2-3 minutes.
Whisk every 15 seconds until the mixture are thickening up and not runny.
Add the vanilla essence to the milk tart mixture and mix with the whisk.
Place the milk tart mixture into ramekins.
Sprinkle some cinnamon over the milk tart puddings.
Let the milk tart pudding cool down before placing it into the fridge.
Place in the fridge for 2/3 hours or overnight till set.
Serve and Enjoy!
Photo: Kristie Townsend