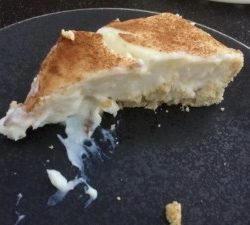 Put the oven on 170°C.
Rub flour and butter together to form breadcrumbs.
Add the rest of the dry ingredients and add the beaten egg, mix well.
Spray and cook the tart dish and press the crust until whole tart dish is covered on the sides as well.
Place in the oven till the edges of the crust turn golden brown for about 10-15min.
After it is golden brown set aside to cool down.

In a microwave bowl add the 3½ cups of milk.
Place in the microwave for 5-10 minutes until the milk is steaming hot.
In a separate small bowl add the 1 cup cold milk, with the 80 ml maize cornflour and 80 ml castor sugar.
Mix well so that there are no lumps.
Add the cold milk to the warm milk mixture while whisking.
Place in the microwave for 2-3 minutes and whisk in between for 30 sec at a time.
Remove from the microwave and add the 80 ml flour while whisking vigorously so that there are no lumps.
Add the last 80 ml maize cornflour and also whisk vigorously so that there are no lumps.
Place back into the microwave and microwave for 2-3 minutes.
Whisk every 30 seconds until the mixture are thickening up and not runny.
Add the vanilla essence to the milk tart mixture and mix with the whisk.
Place the mixture on top of the crust in the tart dish.
Sprinkle some cinnamon over the milk tart.
Let the milk tart cool down before placing it into the fridge.
Place in the fridge for 2/3 hours or overnight till set.
Serve and Enjoy!
Recipe posted and photos by Kristie Townsend