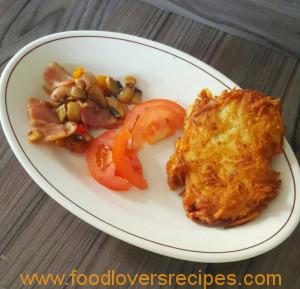 Shred the potatoes and wash in water, until water is clear, drain and squeeze dry.
Shred the onion and place with potatoes and dry both until all water is out. (It needs to be dry.)
Add potatoes & onion shreds (that are mixed now) in a bowl, mix flour in, add salt and pepper to taste and other seasoning. Add egg and mix with a spoon. Mix with a spoon, slightly that all ingredients are mixed but the shredded potatoes and onions still remains in the shredded form. It should be a dry mix in the end. Make little cakes of the mixture. (Size according to own preference).

Heat oil in a large pan (I normally only add enough oil in the pan that the half of the Hash Brown is covered in oil. When the oil sizzles, place the mixture within the oil. Cook until brown on the bottom, flip over and repeat the process until the hash brown is thoroughly cooked and brown. It normally takes about 5 – 7 minutes per hash brown. Remove and drain on paper towels.