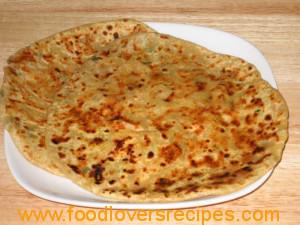 ALOO PARATHA
Aloo Parathas are perfect for a weekend breakfast or brunch. Parathas are one of a number of Indian whole wheat flatbreads. They can be made
plain or stuffed with a variety of different fillings. This recipe features the most popular filling, which is potato.
Makes 6 Parathas.
for the Dough:
1 cup whole-wheat flour
1/2 cup water (Use more as needed)
Pinch of salt
for the Potato Filling:
2 medium potatoes
1/4 teaspoon salt
1/2 teaspoon cumin seeds (Jeera)
1 chopped green chili
2 tablespoons chopped cilantro (green coriander)
1/2 teaspoon garam masala (optional) (available Indian in grocery stores)
1/2 teaspoon amchoor powder (optional)
Also needed
1/4 cup whole-wheat flour for rolling
Oil to cook
Method
Making the Dough:
Mix flour, salt, and water together to make a soft dough (add water as needed).
Knead dough for two minutes on a lightly greased surface to make the dough soft, smooth and pliable.
Set the dough aside and cover it with a damp cloth. Let the dough rest at least ten minutes.
Filling
Boil 2 medium potatoes until tender.
Once cooked, drain the water and let the potatoes cool down. Note: Do not cool the potatoes under running water, as they will absorb the water and come out too soft.
Once the potatoes are cool enough to handle, peel and mash them.
Add green chilies, cilantro, cumin seeds, garam masala, mango powder, and salt to mashed potatoes. Mix well.
Making paratha:
Divide the dough into six equal parts and form into balls.
Then divide the potato filling into six parts and shape into balls. Potato balls should be 1½ times larger than the dough balls.
Roll dough ball into a 3” circle. Place a filling ball in the center. Pull the edges of the dough to wrap it around the potato filling. Repeat to make all six balls. Let the filled balls settle three to four minutes.
Meanwhile heat an iron or other heavy skillet on medium high heat until moderately hot. To test, sprinkle water on the skillet. If the water sizzles right away, the skillet is ready.
Press the filled ball lightly on dry whole wheat flour from both sides.
Using a rolling pin, roll the balls lightly to make six-inch circles, keeping the sealed side of the balls on top. If the dough sticks to
the rolling pin or rolling surface, lightly dust the parathas with dry flour.
Place the paratha on the skillet. When the paratha start to change color and begins to puff up, flip it over. You will notice some
golden-brown spots.
After After a few seconds, drizzle one teaspoon of oil over the paratha. Flip the paratha again and lightly press the puffed areas
with a spatula.
Flip again and press with a spatula making sure the paratha is golden-brown on both sides. Repeat for the remaining parathas.
Paratha are best served hot and crispy. They will be soft if not served hot. If you are not going to serve them right away, cool
them on a wire rack to keep them from getting soggy.
Parathas can be kept unrefrigerated for up to two days wrapped in aluminum foil or in a covered container. For later use, parathas can be refrigerated three to four days or frozen for up to a month. Re-heat using a skillet or oven.
Variations
Substitute chopped cilantro with ¼ cup finely chopped mint leaves, or experiment with your favorite herb. Be sure to pat the herbs dry before adding to the mixture.
Serving Suggestions
Parathas can be served with Tomato Chutney, Plain Yogurt, mattar Paneer, or Green Chilli pickle.
Serve it like a Mexican quesadilla by topping it with cheese and sliced tomatoes, then folding it in half.