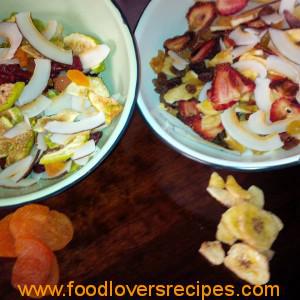 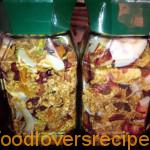 HOMEMADE MUESLI
The oats mixture is already in the oven. The bowl on the left includes homemade dried coconut, dried figs, cranberries and dried Turkish apricots. The bowl on the right includes coconut again, banana chips, dried strawberries and golden sultanas.
Recipe:
4 cups rolled oats
1 cup sliced almonds
pinch of salt
1 tsp cinnamon
3/4 tsp of vanilla powder
1/3 cup of canola oil (or grape seed oil)
1/4 to 1/3 cup of real maple syrup – available at Woolies
1/3 cup of pure honey
Mix the oats, almonds, salt, cinnamon, vanilla
then mix the canola oil, maple syrup and honey well and stir into the oats making sure its well mixed. Spread onto one large or 2 small baking trays and bake in the oven for 20 – 25 minutes. 160 deg C thermofan, 170 deg C regular oven.
Once lightly browned remove from oven, add fruit of your choice. Switch oven off and return tray to oven allowing everything to cool down together, you can leave the oven door slightly open because the coconut is inclined to burn a little. Store in an airtight container when cool. Great with yoghurt and honey for breakfast.
Variations are my own
Photo: Cheryl Lynne Botha

One thought on “HOMEMADE MUESLI”