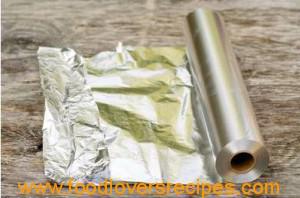 FOIL SHINY SIDE UP OR DOWN
According to Reynolds Consumer Products, during manufacturing, two layers of aluminum foil are passed through the rolling mill at the same time. The side that comes in contact with the rollers becomes shiny, and the other side emerges with a duller finish. But is there a difference in how the surfaces reflect heat that affects cooking?

Even in the test kitchen, some test cooks prefer cooking with the shiny side up, others the opposite. To settle the issue once and for all, we baked stuffed manicotti covered with foil shiny side up and shiny side down. A probe thermometer inserted in the center revealed that both casseroles reached the same temperature (within a couple of degrees) in the same amount of time. To test browning, we oven-baked bacon on foil-lined baking sheets. Shiny side and dull side produced crisp, golden-brown bacon within a few seconds of each other.

THE BOTTOM LINE: The shiny and dull sides of aluminum foil insulate and conduct heat at the same rate.
SOURCE: America’s Test