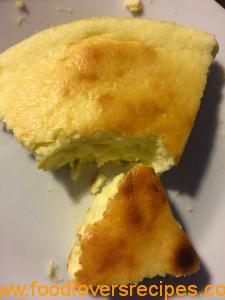 JAPANESE CHEESECAKE
“Japanese Cheesecake” With Only 3 Ingredients!
The whole world is crazy for this delicious Japanese cheesecake, which is preparing for 1 hour and ingredients that probably you have in your kitchen.
Ingredients:
3 eggs
120 g (4.5 oz) white chocolate
120 g (4.5 oz) cream cheese

Preparation:
First separate the egg yolks from the whites. Then place the whites in the fridge and heat the oven to 170 Celsius degrees (325 F). Melt the white chocolate into a pot. After cooling, mix it with cream cheese, then add the egg yolks and stir well. Remove whites from the fridge and mix them well. (point stage)
Using a plastic spoon stir the mixture of egg whites and mix with cream cheese mixture and chocolate so you get a homogenized mixture.
Pour the mixture directly into the pan, which is previously covered with butter, to do not cleave the mixture. Bake for 15 minutes at 170 Celsius degrees (325 F), and then 15 of slightly lower temperatures around 150 Celsius degrees (300 F).
Turn off the oven and leave the cake to stand for 15 minutes.
Remove, leave to cool completely, then decorate with powdered sugar.

Photo:  Jody Boshoff
Tried the “Japanese cheesecake” recipe tonight and it worked so well! Light as air. I would either double the ingredients next time or use a smaller pan but the texture is great and it’s simple to make.
Jody Boshoff
You need the egg whites to be very stiff and fluffy and to fold in the other melted ingredients with yolks mixed in very carefully…bake in a small round dish not a large one!