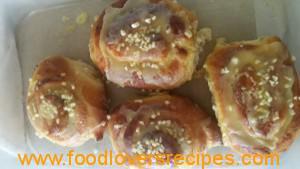 Mix Milk +butter+Sugar in a Sauce pan. Bring to almost a boil. DO NOT boil, milk will curdle. Remove from the heat and let it cool. Add yeast packages. Add 8 cups of flour+Baking Powder+bicarb+salt.

Cover and let rise 1 hour. When risen put on a floured counter and add the other 1 cup of flour while kneading it in.

Take half amount of dough and roll out into a rectangle. Then spread a thin layer of melted butter then sprinkle with cinnamon and brown sugar.

Roll the dough up towards you. Like a rolly polly. Fold the dough up and close the roll by pinching it together.

Cut it into thick slices and place them in a greased pan almost touching each other. Let these rise about 20 minutes and put them into the oven 180 for about 15 minutes.

Remove and cover with decoration
Recipe and picture:  Dorea Fischer