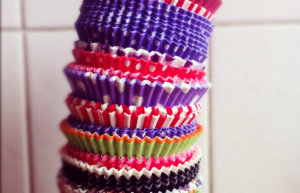 Making the cupcake liner stick to the cupcakeWhat to do when cupcake liners start to come off?One thing I stumbled upon when I first embarked on my cupcake-making-journey is that of cupcake liners not sticking to the cupcake. Cupcake liners can really add to the cupcake as a whole. So it’s definitely a problem when you have invested in some pretty cupcake liners and they just start coming off! I decided that wouldn’t do and started doing some research on the net and trying some things out. Here are my tips on preventing it from happening.Always immediately turn the cupcakes out of the pan after getting them out of the oven. Don’t pull them out with your hands, but really just turn the pan around and let the cupcakes fall out of the pan onto the counter. (Make sure your cupcakes are entirely done, because if they are still ‘raw’ so to speak, they will splatter. ) Why do this? If you leave them in the pan to cool, condensation will occur between the cupcake and the pan, resulting in the liner getting moist, thus causing it to peel off.Be sure to fill the liners enough. The liner should be filled between 1/2 – 2/3 full. Why? If there is not enough batter, it will not stick to the top. If there is too much batter it will spill over. (Although better overfilled than underfilled.) It also matters in what way you fill the liners. Personally, I use an ice cream scooper and that always works for me, but some people prefer using a piping bag. Anyway, make sure the batter is on the bottom of the liner and to the sides of the liner. So the batter shouldn’t just be a blob in the middle but spread out so that it can stick to the liner better. Or try tapping the cupcake pan on the counter to let the batter settle in any spaces that aren’t filled yet.Also make sure the cupcake liner fits the pan! If the cupcake liner is too big for the pan and it kind of wrinkles up when you put it inside the pan, it is more likely that it will peel off later. I have two different pans for that reason. I know, annoying. Liners/pans should be universal. But alas, they’re not.Look at your recipe to see if it is not too greasy. Cut down on the amount of butter. Butter gets greasy and when the liner gets greasy it won’t stick. You could also switch to oil but that does affect taste, obviously. Or at least cream the butter enough with the sugar, then add the rest of the ingredients so that it is mixed well and you end up with less greasy liners.It seems baking temperature could also matter, which could depend on your oven specifically. I’ve read someone saying to bake it on 160 degrees (Celsius) and not higher because then the cupcakes won’t rise too fast (but you would have to keep them in the oven longer). Someone else said, on the contrary, to bake them on 200 degrees but for a shorter time. Personally, I usually bake cupcakes on 180 degrees for 20-25 minutes unless the recipe really tells me otherwise. There doesn’t seem to be a definite answer on this one so if you’re having this problem I would mess around with your heat and baking time a bit.The way you store them may affect the liner peeling off as well. An airtight container is not recommended. Put them in a cake box or invest in a special cupcake storage box, for example like this one here.I’ve also heard people say it can depend on the brand of the liner, but I don’t think it can depend entirely on that. Maybe the brand plus other factors such as the above, who knows? Some liners might work better with specific recipes, I don’t know. If you’re interested, the liners I’ve used so far are from Wilton, House of Marie, Dille & Kamille*, Xenos*, Hema*, Albert Heijn* , Culpitt and PME. In my experience, these are all fine as long as you make sure they fit the pan, fill them up correctly, and turn the cupcakes out immediately.I have a few more tips to share for you though:If it happens to you anyway, you can try to fix the cupcake by making some sugar glue (water + sugar, confectioners or regular) and ‘gluing’ the cupcake to the liner. If fixing it with sugar glue is not an option, use decorative cupcake wrappers instead of liners.If you want to make really sure it doesn’t happen, you can try to put TWO liners in the pan. First time I’ve done this, it was on accident, but I found that while the second falls off, the first one tends to stick better. It is quite wasteful though and I wouldn’t recommend doing it with more expensive liners.FYI, you do NOT ever have to spray or grease the pan when using cupcake liners. They should come out off the pan on their own.For me personally, just turning the cupcakes out immediately and using well-fitted liners has always worked for me and I didn’t need to mess with recipe/oven, but you will have to find out what works for you specificallySunday Belle – blog by Angie.